What subject matter is considered essential in today's curriculum?

What is the purpose of education in contemporary society?

Why study the arts?

Is there a place for arts in the curriculum within this standards-based instructional system?

Answers to these questions vary according to the historical and cultural values of a particular time and place in history.  The needs of current society dictate educational goals, objectives, and standards.  Now that we have high academic performance standards that we expect all students to achieve in all subject matter, the arts often fall to the wayside.  Although it would be wonderful to dedicate time to the arts as we have in past eras, the reality is that we often have to slip the arts in through the back door!  One way to make sure our students still receive instruction in the arts is to integrate the arts into other parts of the core curriculum.  This may not be ideal for those of us who view arts as central to life.  But, the reality of classroom with its emphasis on test preparation and limited amount of time for teaching anything but the basics - or what is being tested -  presents a real challenge for the elementary teacher!   We've discussed the integration of music with literacy, math, and science, but one of the easiest areas in which to integrate the arts is social studies.  In fact, the arts are an important part of the national and state social studies and history curriculum standards. The visual and performing arts standards and the history/social science standards overlap throughout each grade level.  The areas of the California History Social Science previous framework that emphasized the arts are:

Below are quotes from philosophers on what was considered "essential" for education during three very different time periods. Plato valued mathematics and "harmonics." Dewey described education as "life" and all that life is, including arts and culture.  Howard Gardner, the leader of early multiple intelligences research and part of Project Zero promotes the idea that we must understand and enhance learning, thinking, and creativity in the arts, as well as humanistic and scientific disciplines, at the individual and institutional levels.   Howard Gardner's speech is obviously the most timely for us as teachers today.  Note that quotes Plato:

"Through education we need to help students find pleasure in what they have to learn."

What should we teach?

What should students know and be able to do?

What is the impact of the arts on history and culture?

Our standards give us a guide to the content of knowledge we must consider important in our curriculum planning.

8. Content Achievement Standard: Understanding relationships between music, the other arts, and disciplines outside the arts

3.0 HISTORICAL AND CULTURAL CONTEXT
Understanding the Historical Contributions and Cultural Dimensions of Music

Students analyze the role of music in past and present cultures throughout the world, noting cultural diversity as it relates to music, musicians, and composers.

4.0 AESTHETIC VALUING
Responding to, Analyzing, and Making Judgments About Works of Music

Students critically assess and derive meaning from works of music and the performance of musicians according to the elements of music, aesthetic qualities, and human responses.

5.0 CONNECTIONS, RELATIONSHIPS, APPLICATIONS
Connecting and Applying What Is Learned in Music to Learning in Other Art Forms and Subject Areas and to Careers

Students apply what they learn in music across subject areas. They develop competencies and creative skills in problem solving, communication, and management of time and resources that contribute to lifelong learning and career skills. They also learn about careers in and related to music.

Social Studies and History Standards - Integrating the Arts into Curriculum

"America, as a nation, unites as one people the descendants of many cultures, races, religions, and ethnic groups. The American story is unfinished, and the outcome rests in the students’ hands."

National Council for the Social Studies

Look for connections to the arts in the National Thematic Strands for the Social Studies. 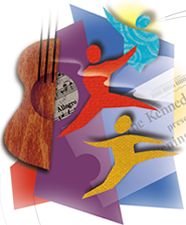